History of Mylnhurst – From its Victorian beginning to thriving Preparatory School

It all started with Major William Greaves-Blake in 1883

Blake was military man and served in the 6th Dragoon Guards. History shows that Mylnhurst originally stood in an isolated rural location consisting of open farmland interspersed with pockets of woodland.

The Greaves-Blake’s nearest neighbour was Henry Vickers, the Lord Mayor of Sheffield in 1860, who lived at Holmwood 500 metres to the SW overlooking Ecclesall Woods. After the death of his first wife, William married Rebecca Jessop in 1869, the daughter of Thomas Jessop steel maker and founder of Jessop Hospital and they moved into Mylnhurst in 1883.

Mylnhurst was built following the neo gothic style, costing £14,000, a considerable amount at the time. The house was large for a family home, but the Greaves-Blakes needed the space as they had twelve children. Mylnhurst was renowned for its large beautiful gardens, with a lake, Japanese garden, greenhouses and vinery. The early part of the 1900s saw a considerable parcel of land sold off to create the housing on Button Hill and Millhouses Lane and the lake was filled in at this time.

In 1908 Major Greaves-Blake’s son Philip married Dorothy Barbour and they were gifted a piece of land to construct their own home, known as Button Hill House at 1 Woodholm Road.

Major Greaves-Blake died in 1904 but his widow Rebecca continued living at Mylnhurst until her death in 1920 when the house was sold to W.J. Walsh owner of the John Walsh department store on High Street in central Sheffield.

When the Walsh family moved from Mylnhurst to a house at Ranmoor in 1933 it was sold to the Sisters of Mercy who had been invited to start a  Catholic School in the community of Ecclesall. The adjacent Button Hill House was sold to the Sisters in 1936 and was used as a boarding house for Mylnhurst pupils, it later became known as St Gerards and housed novitiates, afterwards it was used as university lodgings before being demolished to make way for bungalows on Woodholm Road.

The school began with seven pupils when it first opened and was known as Mylnhurst High School, changing later to Mylnhurst Convent School. By 1935 there were 96 pupils including 10 boarders and the old billiards room had been converted into a dining room.

In more recent history the school has established itself as a leading Preparatory School in South Yorkshire and Derbyshire with an outstanding academic and sporting record.

The passion for learning, brought to Mylnhurst by the Sisters of Mercy, burns stronger than ever as the school continues to deliver the very highest standards of care and education. 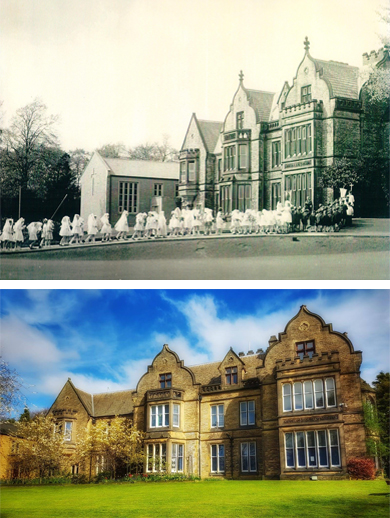 Mylnhurst is constructed from course squared stone with a slate roof which has multiple ridge stacks upon it, however the very tall chimney stacks were removed after being damaged in a gale in 1962. The house has much ornate stonework including elaborately carved pillars which support an oriel window on the south front of the house. There is a castellated tower integrated into the building on the north side. The two storey stable block on the north side has an archway and oriel window. The highlight of the interior is the ground floor front room which has a cross beam ceiling, moulded cornice, wooden fireplace and overdoor dating from around 1900.

Today the building houses the Mylnhurst Preparatory School and Nursery, although it is a Catholic Foundation it welcomes all faiths. The grounds have been utilised for school use and include facilities such as an indoor sports hall, dance studio, 25 metre swimming pool, outdoor sports fields and play areas.